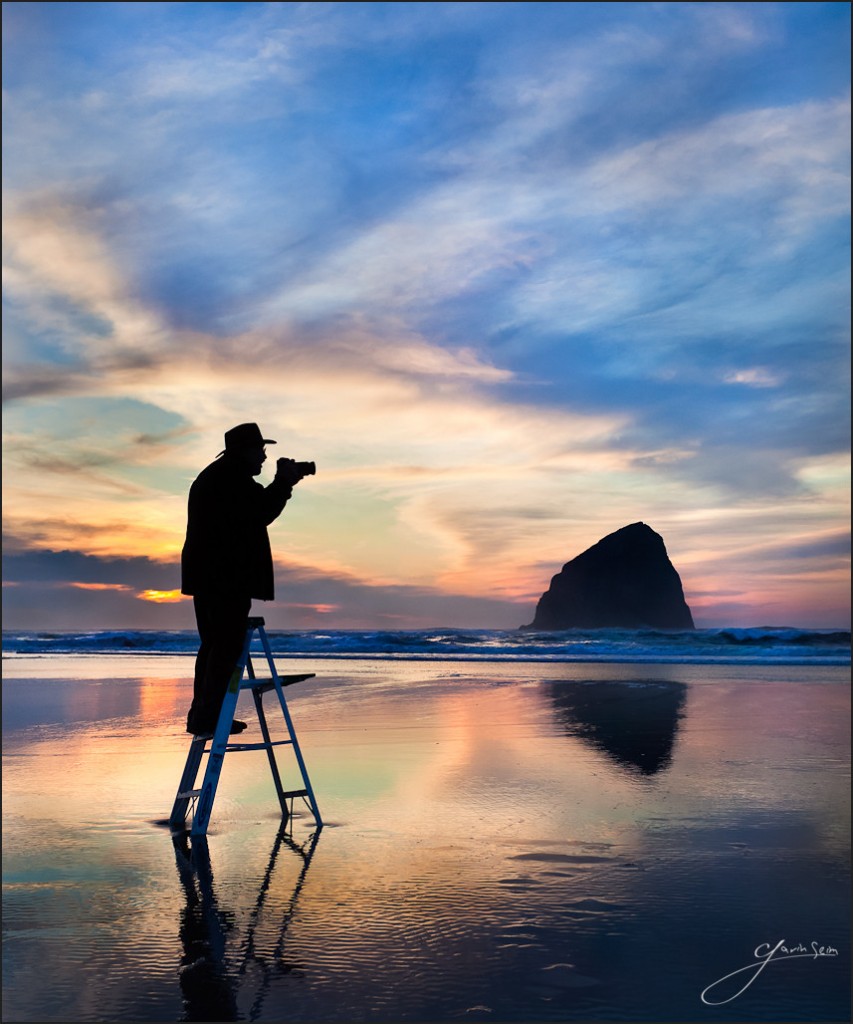 The Artists Sunset - by Gavin Seim

Last Fall I (Gavin) took a trip with my friend and mentor Ken Whitmire. A man from whom much of my knowledge as an image maker has been inspired. It was quite a trip and after making it home in one piece, Nathan and I wrote a story. A true story, but as all our stories written side by side to tell it in our Brothers Seim way. The image on the left is a piece I made during this trip called, The Artists Sunset. You can learn more about that here on my pictorials journal. But now for your consideration…

Whitmire and the Rally Car.
by The Brothers Seim

We left early that morning from Yakima and drove all the way to the Oregon coast. Ken had a portrait session on the beach and I went along to get footage and stills of him working for a video I was producing, that and to spend a few days with one of the most experienced wall portraitists of this century. Taking a trip with Ken Whitmire is akin to cruising Yosemite with Ansel Adams. These would be memories to talk about when I’m as old as Ken. If I live that long.

It was beautiful and surprisingly warm for a November evening. One of those sunsets that seems to last forever. You can’t expect those on the coast, but you hope for them. They glow with brilliant color, light that goes on and on, like a great song that just keeps playing. We drove Kens tiny Toyota Matrix right down onto the beach. I’m not sure that’s even legal. But at 82, I figured Ken could chat his way out of a ticket. What had me worried was the sand. In my travels I’ve spent my share of sand time, as crowds gather to gawk at the stupid guy who “thought” he could make it. But then, I’m a young’un. Only a jerk would stop to gawk at an eighty year old man.

“Ken maybe we should stay in the parking lot.” I suggest.

“No, we’ll be just fine.” he says with that old man tone that suggests he’s done this dozens of times before. He guns it. Well, as much as you can gun a Toyota Matrix. We plow through the soft entry path, slowing with each passing second, barely reaching surf-packed sand, then driving on down the beach.

It was a brilliant family portrait. Not the kind that everyone who buys a camera and claims they’re a photographer goes out and makes. This was the work of a master. I helped with lights and exposure setups, watching how Ken worked as I grabbed my stills and footage. After the portraits we hung out on the sand till after dusk, loading up while getting photographs of the sunset and a few of me posing with my 4×5 view camera.

Finally we headed out. Back at the soft sand, Ken tries to gun it and get us to pavement. Moments later we’re were buried up to the bumper. No biggie, right? Ken came prepared with a brand new tow rope and the folks who would normally be expected to stand gawking were super nice, getting their 4×4 and helping push or pull as needed to set the little car free. Ken’s no stingy old guy, either. They earned a case of beer for their deeds.

After grabbing a sizable sack of saltwater taffy, we moved on. Coming through Tillamook we stopped, not for cheese, but for dinner at a place called the Rodeo Grill. They had peanuts on the tables and you just tossed the shells on the floor. It felt satisfying. Probably because you can’t do that at your mom’s house. Not ever.

We moved on, working thorough the the hills towards Portland. Ken thinks his Toyota is a rally car, but he’s not reckless. We make it to Portland around ten thirty and I find a Motel 6 on my iPhone. We just need a place to bed down, but turns out it’s pretty seedy. I glance over reviews mentioning something about bed bugs and Ken says “Lets move on.” We promptly get out of Dodge, deciding to make a place called the Vagabond in Hood River. Word On Yelp is that it’s old, but cheap and pretty nice.

It all happens about half way. It’s storybook dark outside and Ken’s cruising at about seventy. I look up and barely have time to point shout “uh ehh uh”. A huge bull Elk is looking down like a god from the middle of the interstate. I don’t know if it’s the darkness, the long drive, or the carmel and marshmallow sweet potato I ate at the Rodeo, but I could swear this is the biggest Elk I have ever seen. I felt like a child in our tiny rally car, but Ken reacted instantly and I think God was is the back seat. This was beyond rally driving. “ELK” was feet in front of us as Ken jerked the wheel so hard that Mr. Toyoda probably turned over in his grave. We just slid by ELK at about sixty miles per hour as he smiled down on us.

It was like slow motion. I felt us sliding and I can still hear gear flying around in the back. I remember thinking about stories I’d heard. How Elk are the worst because their legs can come through the windshield. Then they bludgeon you to death.

The car squealed like my two year old on tickle day, rubber against dry pavement. Then Ken pulled hard left to correct and I think we did a three-sixty. I wondered how much damage slamming into the median at rally speed would do. But we glanced carelessly off the concrete, then back across the interstate which was mercifully clear of other vehicles. Finally we stop. I note with satisfaction that we’re still alive and that my underwear remain dry.

ELK walks off claiming no fault. A guy comes out with a light from the frontage road to see if we’re ok. It seems the only damage is some nasty scrapes on the bumper, so we move on to the Vagabond, Ken grabbing us a nice little double room for half price because it’s Veteran’s Day.

The next morning we sleep late, have a big breakfast and a nice drive home without any issues. Well, except nearly pulling in front of a semi-truck. But that was no big deal. Because we didn’t.